The Brother I. Leo O'Donnell Archives at Christian Brothers University

Please email all Archives information and appointment requests to archives@cbu.edu.

The O'Donnell Archives is located outside of, and at a distance from, Plough Library.

About the Barry Collection

"The Man And The Collection"

Edward F. Barry (1893 - 1984) was born in Memphis, Tennessee on April 28, 1893, son of Edward Barry who immigrated from County Cork, Ireland around 1850 and Annie Maude Kelly of Milwaukee, Wisconsin. He was baptized shortly thereafter at Sacred Heart Catholic Church and was later to attend his early grade school years at Sacred Heart Grade School in Memphis. Thus begins the life a great, yet simple man.

Ed attended Christian Brothers College, Memphis, Tennessee, the Junior High School Division, from 1908 to 1910, but was to graduate high school from Marquette Academy, Milwaukee, Wisconsin in 1912. He attended St. Mary's College, St. Mary's, Kansas where he was to receive his A.B. degree in 1915. Soon thereafter he began working on his law degree at Georgetown University in Washington, D.C. where he was awarded his LLB degree in 1920, during which time he interrupted his studies to serve in the U.S . Army Air Corps. Upon graduation from Georgetown he was immediately admitted to the Bar in Texas in 1920 and in 1922 in Memphis, Tennessee.

After a long and distinguished law career and life as a civic leader, Edward Francis Barry died after a brief illness on September 13, 1984 at the age 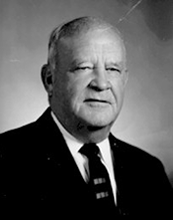 of 91. He left the bulk of his estate, including his personal archives, and records to the Catholic Diocese of Memphis. The Most Reverend J. Francis Stafford D.D., then Bishop of Memphis, donated Mr. Barry's papers to Christian Brothers University. Bishop Stafford felt that the University would be the most appropriate location for research and study of this historic local and national figure. Mr. Barry was instrumental in assisting the Christian Brothers in acquiring the property on East Parkway where the Brothers moved from Adams Street in the 1940's. The University remains at this site today. Barry was also an Affiliated member of the Christian Brothers, having received Letters of Affiliation from the Superior General on May 5, 1942. Knowing that Barry was a true "Brothers Boy", Bishop Stafford believed the Barry Collection would find a home at CBU.

The Barry Collection consists of almost 400 separate files, 10 scrapbooks and over 100 individual honors and awards, including two Papal Orders, The Knighthood of St. Gregory the Great and the Sovereign Military Order of Malta. The collection contains the personal papers of Mr. Barry as well as legal papers of clients, background materials for the many boards on which he served, and letters to and from important personages in his life.

Edward F. Barry was an outstanding civic leader, philanthropist, an avid sportsman and noted humanitarian. His personal archives of records show him to be the most outstanding Public Servant the City of Memphis has produced in the 20th Century. On February 28, 1984, Bishop Stafford wrote to the Very Reverend Edward J. Slattery, President, Catholic Extension Society of the United States of America nominating Mr. Barry for the Extension Society's LUMEN CHRISTI award. In his letter of nomination, Bishop Stafford said "Edward F. Barry must be counted as one of the great Catholic Laymen in the Church of America if he is judged by the standards of self dedication, the sharing of his resources and above all as a staunch advocate for the social needs of his fellow man." Barry worked for better housing for the poor and elderly, better health programs, better education and community development as a whole. He has been widely acclaimed and honored as a Christian and humanitarian. He served as a close personal advisor to five Catholic Bishops in his native state of Tennessee. For over fifty years, Barry was recognized as Memphis' leading citizen and community leader. His activities extended over a broad ecumenical base, and he is still held in the highest esteem by Religious and business leaders. Local government officials, church leaders and businessmen looked to Ed Barry for leadership at times when the community was faltering.

Ed Barry's accomplishments are legion and have extended far beyond his native city. He was recognized nationally for his leadership in Public Housing, health care, the American Red Cross and many other charitable, religious and civic endeavors.

Ed Barry's honors and awards are many. He was inducted into Christian Brothers High School Hall of Fame in 1968, received Letters of Affiliation from the Order of Friars Minor in 1970, Letters of Affiliation from the Order of St. Francis in 1961, and Letters of Affiliation from the Society of St. Paul. He has received honorary doctorates from Southwestern University, Georgetown University, Christian Brothers University and St. Bernard's College. His memory has been perpetuated by the renaming of the Administration Building of Christian Brothers University as Barry Hall, through the Barry Building of the Memphis Housing Authority, the Barry Blue Cross and Blue Shield Building, as well as through the Barry Building at St. Francis Hospital, Barry Hall at the former Siena College, Barry Hall at St. Joseph Hospital, and a donation for the St. Peter Village Sanctuary. All of which honor his memory in the city of Memphis.

Awards received by Barry include the John Carroll award from Georgetown University, Memphis Newspaper Guild Citizenship Award, Civitan Club "Man of the Year" Award. He was the "first" honoree to receive the National Conference of Christian and Jews Humanitarian Award, in the City of Memphis in 1962. He also received the prestigious Religious Heritage of America Award in Washington, D.C. in 1969. The American Lebanese Syrian Associated Charities (ALSAC) honored Mr. Barry at their National Testimonial Dinner for outstanding service and leadership to St. Jude Children's Research Hospital. Likewise, for his work at St. Jude, Barry was awarded the Mike Tamer Service Award in 1983. He was the recipient of the Memphis Hospital Council Distinguished Service Award, the Mid-South Medical Council L. M. Graves Memorial Award, the Tennessee Hospital Association Distinguished Community Service Award and the Memphis Sales and Marketing Community Service Award.

St. Jude Hospital presented Mr. Barry a color photograph of St. Jude Hospital in appreciation for his service as Chairman of the Board from it's beginning in 1960 to 1982. Among his honors is a Plaque of Appreciation from St. Peter Home For Children for over 50 years service, a Certificate of appreciation from The Most Reverend Carroll T. Dozier, First Bishop of Memphis, for years of dedicated service. He received the St. Peter Church Award from Dominican Fathers 1984, a Certificate of Appreciation from Governor Lamar Alexander for outstanding service to the State of Tennessee 1969, a Resolution from the Tennessee State Senate naming Edward F. Barry "Honorary State Senator" 1969 and The American Legion, Post No. 1, of Memphis, Certificate of Appreciation Award for service in the years 1948, 1951 and 1972. The National Association of Housing Officials Certificate of Appreciation Award for Service as Commissioner and Chairman of the Local Housing Authority was awarded Ed Barry in 1952 and The University of Tennessee Units "Outstanding Achievements Recognition Award" 1974 are among his collection. A Certificate of Appreciation from Senator Hubert H. Humphrey of Minnesota was sent to Ed Barry for four years of service on the U.S. Department of Health, Education and Welfare, National Health Service Council Memphis in 1968. The Chicago and Southern Airlines Certificate naming Barry "Flying Colonel of Dixieliner Fleet" in 1946, and the American Cancer Society Award 1954 as well as the Baptist Hospital Outstanding Service Award for 1954 are among his honors. The Boy Scouts Chickasaw Council Medal of Appreciation 1975, was one of his prized possessions. Ed Barry was memorialized on the Hernando De Soto "Bridge of Lights" by the Mayor of Memphis Richard C. Hackett in 1986 and Barry received the Dr. James Bodley Americanism Award of 1949.

One of Mr. Barry's many outstanding achievements was his extraordinary leadership in the initial fundraising campaign to establish St. Jude Research Hospital for Children in Memphis. Mr. Barry served as the first and only Chairman of the St. Jude Board of Directors from 1960 until his retirement in 1982 at the age of 89. Danny Thomas stated publicly that "had it not been for Mr. Barry, St. Jude Hospital might not have been possible." The first medical Director of St. Jude, Dr. Donald Pinkel said "Mr. Barry succeeded in bringing together diverse people and interests to define idealistic, yet specific and concrete goals - the confidence he inspired in all who knew him, his generosity made him the ideal leader of the group."

A display of personal memorabilia and awards from the Barry Collection can be seen in Barry Hall on the campus of Christian Brothers University.