Skip to main content
It looks like you're using Internet Explorer 11 or older. This website works best with modern browsers such as the latest versions of Chrome, Firefox, Safari, and Edge. If you continue with this browser, you may see unexpected results.

From Wednesday April 29, 2015 through Wednesday May 6, 2015, students using Plough Library were surveyed about aspects of any potential renovation of the library. They were asked to assign a ranking of 1 through 5 (with 1=least and 5=most) to 12 to the following elements: 24/7 card-accessible space; academic services (advising, for example); academic services (tutoring, for example); computer classroom; group study rooms of varying sizes (seating 2,4,8); improved bathrooms; individual study carrels; public computers and printing; sandwich/coffee bar; snack machines; student lounge; and updated furniture. A line for other, not mentioned was also included, and free-form comments were invited.

Barring space for the Library’s collections and workers, which must be housed in the building, the survey addressed elements that could be considered additions or improvements.

Almost 250 responses were returned, and with one exception, tabulated. Tables 1 and 2 illustrate (1) ranked elements receiving scores of 5; and (2) ranked elements showing all scores received. Table 3 compresses data for Ranks 4 and 5 to show a variation on the overall order of results. Table 4 includes shows all rankings with compressed data. (See tables in image gallery below.)

The majority of the respondents truly attempted to rank preferences. Many provided comments, which follow (unedited) the tabulation of results.

Surprisingly given the popular belief that all students use wireless devices, the desire for wired computers remains high, even three years after the 2012 survey where computers/printing/network/wiring tied with vending as the most named improvement. Public computers and printing and the Computer classroom are second and third to a 24/7 card-accessible space. Compressing the data pushes Public computers to the top of the list—and if public computers and the classroom totals were counted together, they would exceed any other issue, so far as students are concerned. The comments provide some elucidation: there are references to the noisiness of the ITS lab and how crowded it is. Printers are in high demand as is reliable WiFi. It is possible that if WiFi was improved (and WiFi printing activated), there might be less demand for wired computers.

Despite being a gender-specific issue, improved bathrooms come in fourth, regardless of whether the ranks are compressed or not. While Sandwich/coffee bar slightly outscores Snack machines, using vending machines in lieu of a sandwich bar could be a money-saving option.  Furniture, unless it is structural, could be incorporated into the library’s future capital budget requests. 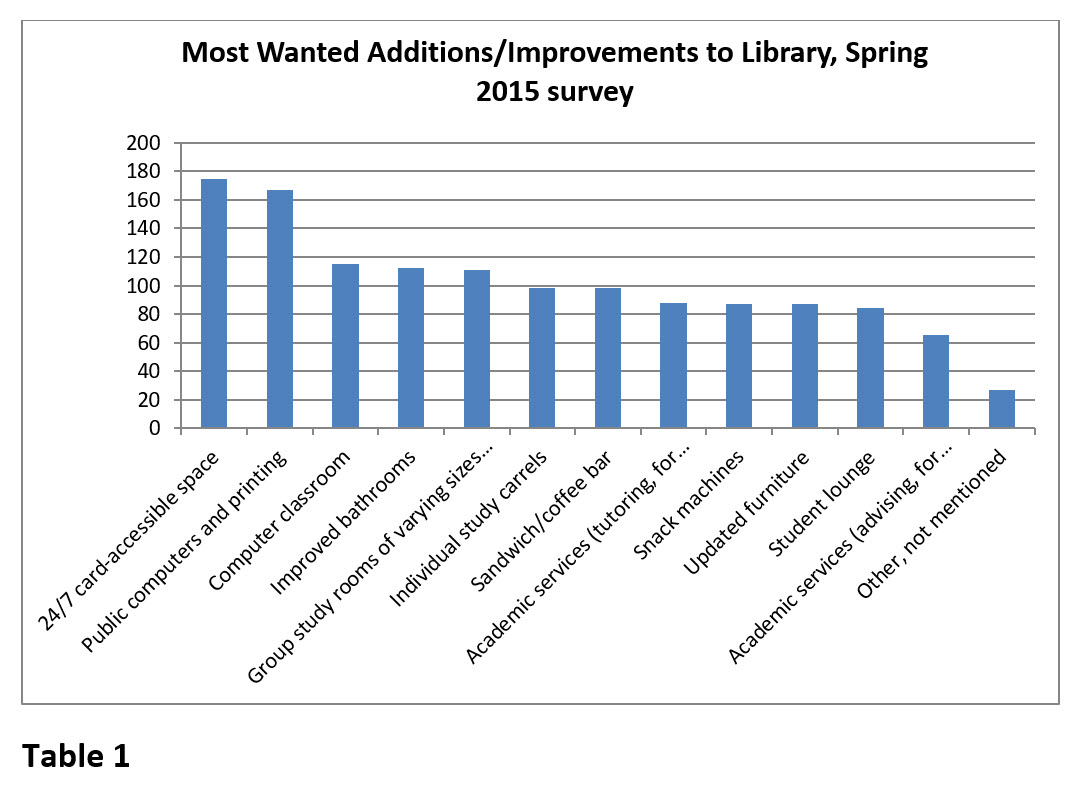 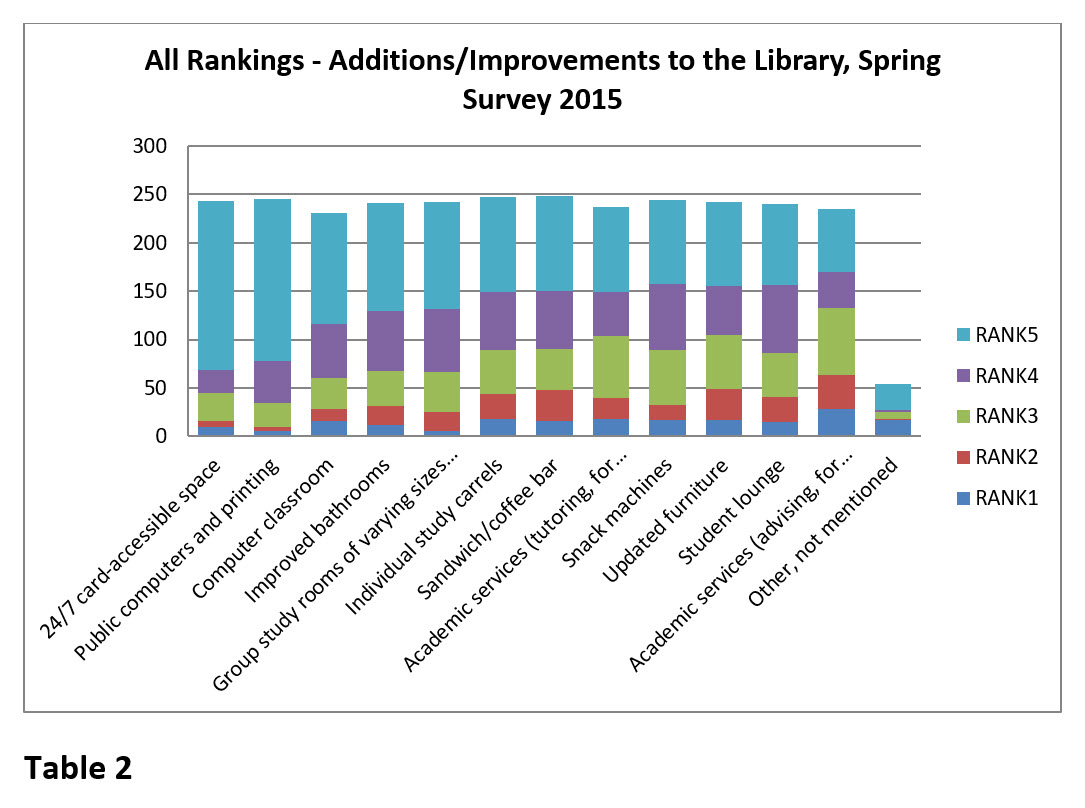 Table 2: All Rankings of Possible Additions/Improvements to Library - Student Survey 2015 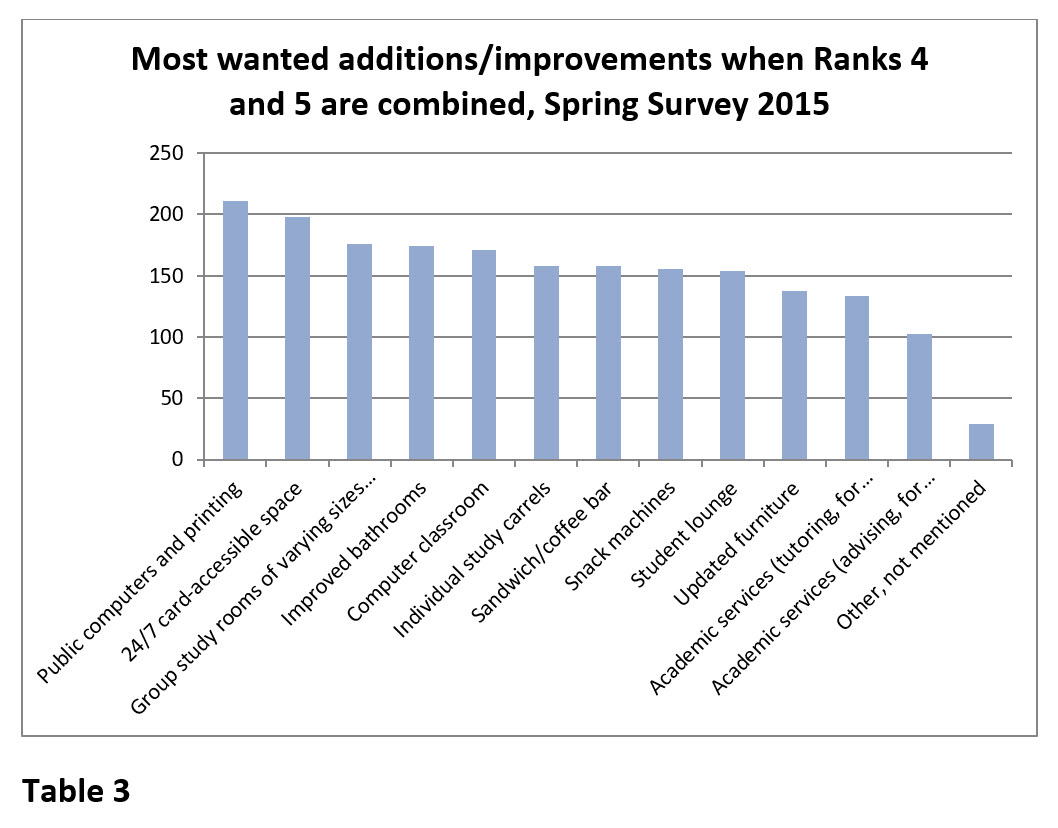 Table 3: Most Wanted Additions/Improvements to Library when 4th and 5th Ranked Options are Combined - Student Survey 2015 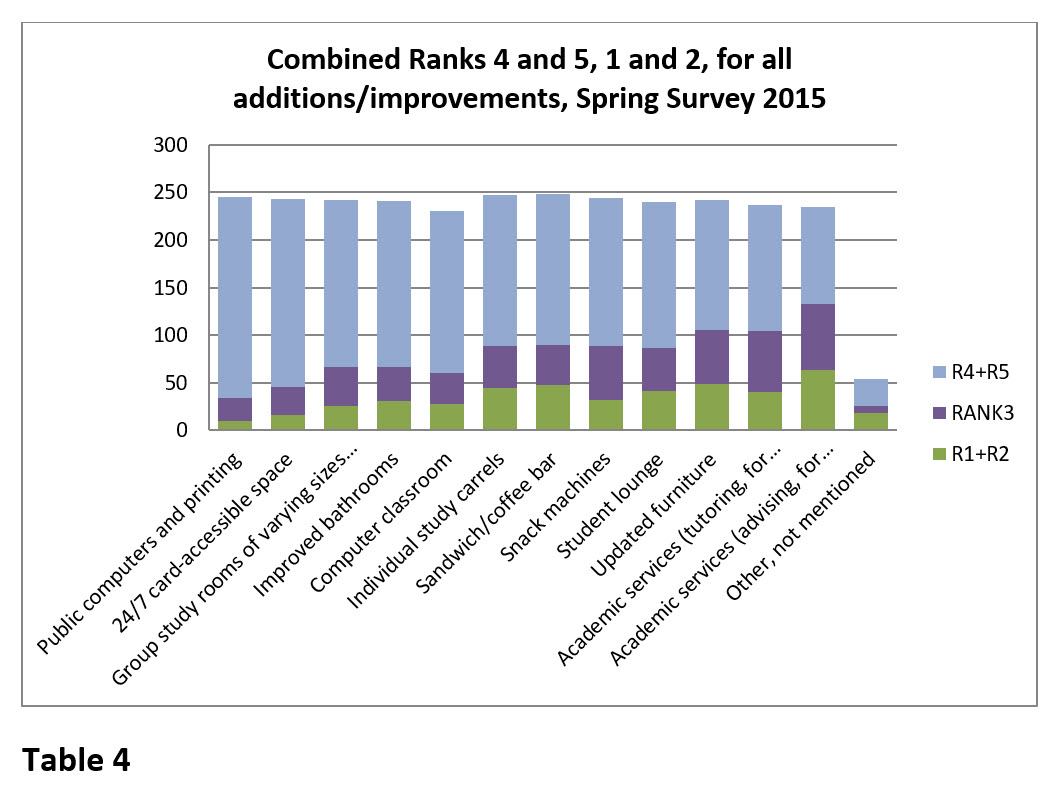