Skip to main content
It looks like you're using Internet Explorer 11 or older. This website works best with modern browsers such as the latest versions of Chrome, Firefox, Safari, and Edge. If you continue with this browser, you may see unexpected results.

During the last two weeks of Spring semester 2012 (study week and the week of finals), students in the library were asked, by means of a survey, how they use the library as well as suggestions for what they would improve about the library.

How Students Use the Library

In the survey conducted during the final two weeks of Spring semester 2012 (study week and the week of finals), students using CBU library were asked how and when they used. Questions were:

In response to question 1, the majority said they studied in the library daily (38%) or weekly (40%). Question 2, regarding time of day, showed a preference for evening study (38%), though all times of the day were marked; and many students marked more than one of the options, suggesting that they come to the library multiple times during the day. In answer to question 3, more than half of the students said they studied alone (54%); again, many students marked two, or all three, of the options. Studying with a friend received 28% of the responses. This may reflect something that library staff have observed—that students study together for company’s sake; students may sit together but will be working on their own individual projects. Answers to question 4, show a large percentage (34%) using laptops, but a larger one (55%) using library computers, with many laptop users indicating that they also use library computers. The printer is used more frequently than any other library equipment (57%). Improved computing and printing needs were among the items most mentioned by students who responded to the open suggestions section of the survey.

What Students Say the Library Needs

Students using CBU library during the survey period were also asked their suggestions for improvements.  The 225 suggestions were loaded into an Excel file and grouped into general categories: appearance/furnishings, bathrooms, computers/printing/networks, hours, lighting, other equipment, physical access, resources,* study spaces, temperature, and vending.  Some comments simply listed items—“restrooms,” “more printers,” “whiteboards,” “quiet,” “new chairs”—while others gave more details (along with editorializing): “swipe card so that we can get in when it is closed,” “to update the overall look of the library like Rhodes College…our library looks really old,” “I would like another printer to be in the computer lab on the bottom floor so that we do not have to walk up to the printer on the second floor,” “[re: solo rooms upstairs…]sometimes I feel like people can hear me-I like to recite my note cards out loud. They are also a bit small by a square foot. Maybe create designated group rooms; two that can be reserved would probably be enough.”

Categories receiving 10 percent or more comments are illustrated in the graph: computers, vending, and study spaces are the top three student issues.

How do you study? 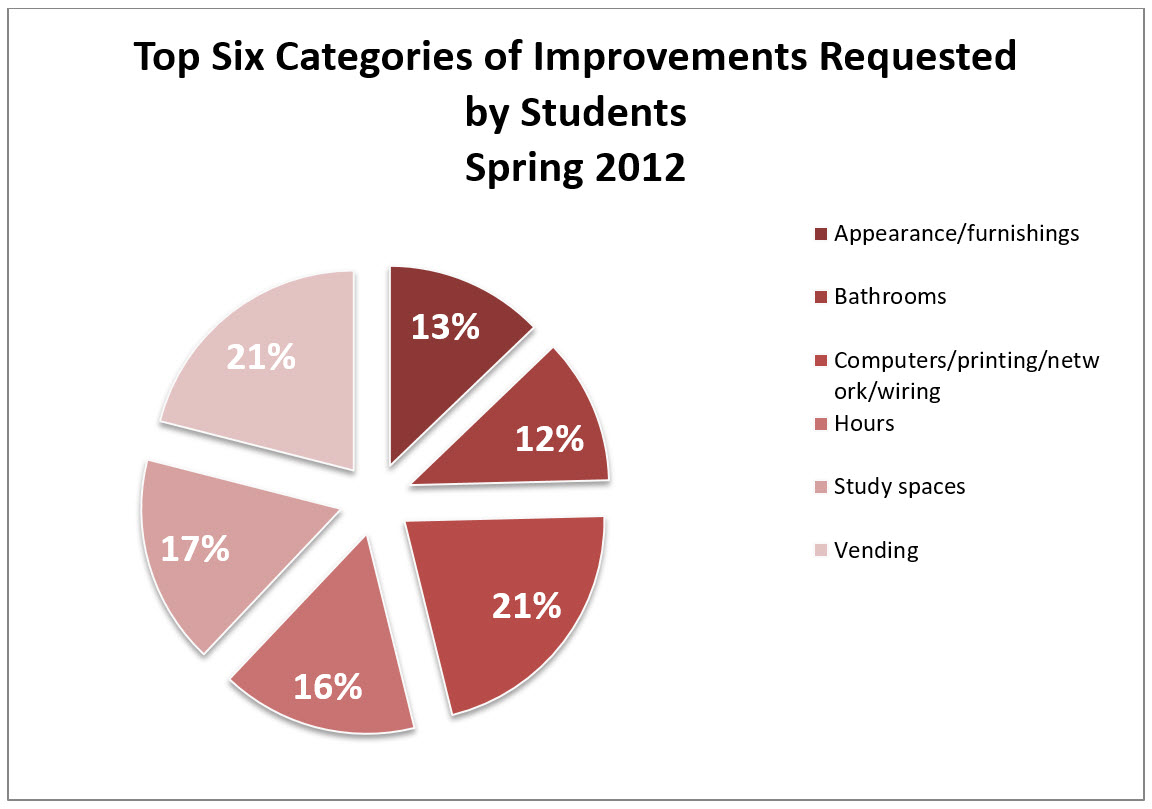